Type what you are searching for:

Gas vs. Foam Motorsport Fire Suppression Systems – Which Are Best? 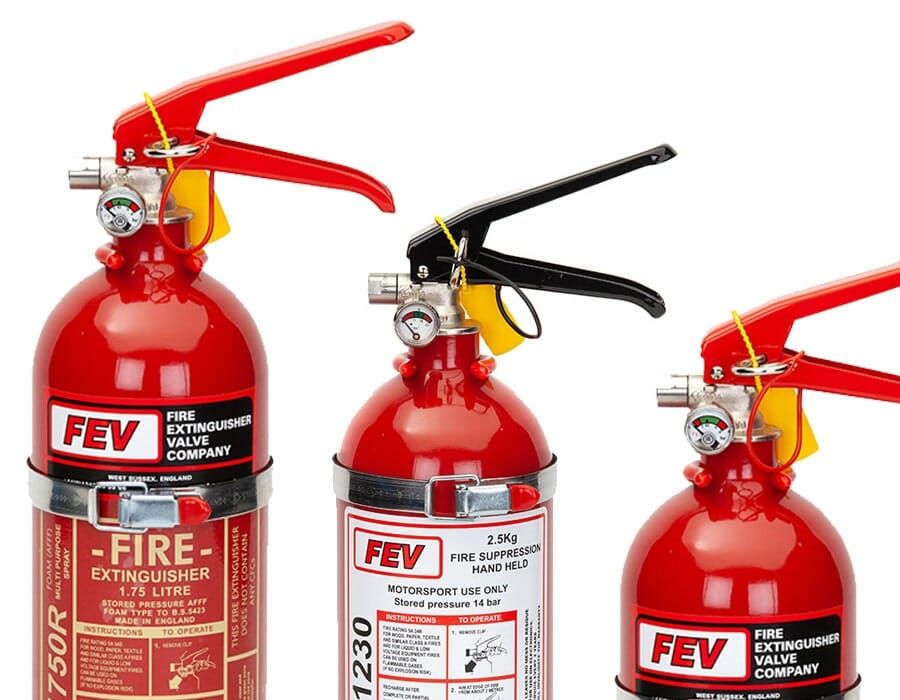 in Motorsport, News
by Stu

If you’re wondering about gas vs. foam fire suppression systems in motorsport, you’re not alone. Indeed, our customers frequently ask about this. So we at motorsport and race car fire extinguisher experts FEV have put together this comparison guide looking at the benefits and drawbacks of each one.

Essentially, as you probably already know, there are two main kinds of fire suppression systems used in circuit and rally cars – gas and foam. Here, we look at each in turn.

What Is A Gas Fire Suppression System?

Gas suppression systems put out fires in racing cars by releasing concentrated gas to reduce oxygen to below the level which sustains combustion, extinguishing the fire. These plumbed-in fire extinguishers can cost more, but are among the most effective methods of fire suppression on today’s market, offering an extremely high level of protection against the ever-present threat of a trackside blaze.

Most systems use a kind of gas called Novec 1230. Halon-based gas fire extinguishers were previously regularly used across the industry, but an EU ban on their use came into force in October 2000 and was implemented in the UK in 2003, after research linked it, along with other CFCs, to ozone depletion.

The driver can activate the system by activating it with a mechanical pull action, electric push-button or remotely. The gas is highly pressurised, so once you’ve triggered the extinguisher, the suppressant quickly disperses across the engine bay and cockpit in a non-directional way. This allows the gas to reach a bigger area more quickly.

#1 They Don’t Leave a Residue on Costly Car Components

Gas-based motorsport fire extinguishers are powderless, and so they won’t leave a residue behind once you activate them. Clearly, this protects your vehicle, the engine and all associated components from the potential damage which the foam-based alternatives can leave in their wake. So there’s no mess to clean up – and no expensive harm to your car.

Equally, it won’t clog up vital safety features, or in any other way create an unsafe environment.

The gas also blocks the fire’s chemical reaction, quickly removing the heat and taking down the blaze. This means that it’s often possible to put out the flames more quickly. So gas-based fire extinguishers provide the highest margin of safety for human occupancy of any clean-agent system.

#3 Ideal When Space is Limited

Because gas is stored as a liquid but discharged as a gas, the resulting systems are smaller and occupy less space. In fact, foam-based plumbed-in fire extinguisher systems have been known to take up nearly three times as much space as their gas-based counterparts, making the latter ideal in limited-space settings, including the cabin of a racing vehicle.

Despite the many advantages, it’s also true that gas-based fire suppression systems and extinguishers can have some possible downsides to take into account. These include:

#1 They Can Cost More

It’s true that gas extinguishers can cost more than the foam alternatives. However, it’s always the case that you get what you pay for, and foam systems still represent long-term value for money. So you may well find you save in the long run, for example because gas doesn’t leave residue behind, so you’re not forking out for expensive repairs.

What Is A Foam Fire Suppression System?

Foam-based systems can control burning flammable liquids (such as engine fuel) quickly, cooling the surface area. The consistency of the substances creates a thick blanket which starves the flames of oxygen and stops the release of flammable gases, effectively smothering the fire.

The standard is AFFF – or Aqueous Film-Forming Foam. These systems have more nozzles, meaning installation can be more complex.

Foam-based technology has improved dramatically in recent years when it comes to its ability to put out fires and burnback resistance. So, at FEV, we’ve updated our entire range of foam-based plumbed-in fire extinguishers and handheld foam systems to use the most recent, highest-performing foam concentrate, to which we add water.

Indeed, with faster discharge of extinguishant and newly designed nozzles, foam-based systems are getting much faster at putting out blazes.

Ultimately, they are an excellent and cost-effective solution to use if weight and space are not critical issues.

Although they are generally more cost-effective than gas-based models, there are a few (minor) downsides to foam-based fire suppression systems when compared with gas.

Overall, it’s not surprising that these fire suppression systems are increasingly popular across motorsport, including with drivers in circuit and rally tournaments. Here are some of the reasons why:

Foam suppression systems are typically more cost-effective than gas-based ones – and this is a key reason why they have remained so competitive. (Maintenance is also cheaper.)

When the foam is in contact with the burning fuel, a blanket of it is formed which seals the fuel’s surface, starving the flames of oxygen and stopping the release of fuel vapour. This gives instant control over a blaze, so the occupant has a protective barrier against the flames. The foam also lingers to prevent further flare-ups.

#3 Water-based, So It works Well For Oil and Fuel Fires

For the reasons mentioned above, foam-based fire extinguishers work particularly well on flames caused by oil and fuel – i.e. trackside fires. Because the water included is conductive, foam wouldn’t work nearly as well on an electrical fire.

And The Potential Downsides of Foam-Based Extinguishers?

Once again, there are a few downsides of foam fire extinguishers when used in motorsport.

#1 May Leave Residue And/Or Damage Car And Engine Components

Unlike the gas-based alternatives, once activated, a foam system needs clearing up afterwards. But the good news is that’s not hard. Either just rinse the foam off with water then use towels to soak up the excess or use a wet vacuum. It’s also worth giving the engine area a thorough rinse, clean and dry. Because of the water in these systems, they can affect the electronics in your vehicle.

#2 These Systems Take Up More Space

Foam-based motorsport fire extinguishers do tend to be bulkier, thanks mainly to the additional nozzles. So be aware that you will have less space, and will likely be carrying some extra weight.

At FEV, we manufacture both types of FIA fire suppression systems – gas NOVEC and AFFF foam, both handheld and plumbed-in. We’re always here to answer your questions and discuss options for your team or vehicle further. Get in touch today to learn more.