Vrooming ahead at Goodwood Festival of Speed 2022 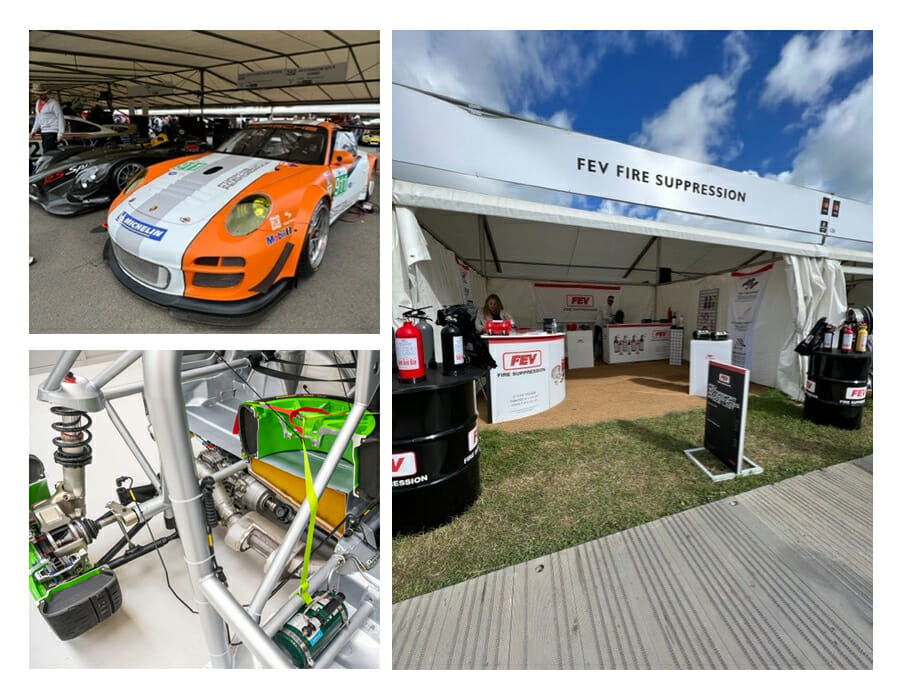 in Formula 1
by Stu

FEV was delighted to run an exhibition stand for the very first time at the glamorous motorsport extravaganza that was the Goodwood Festival of Speed 2022 presented by  Mastercard, throughout the event’s four days from 23rd – 26th June.

What’s more, we were particularly delighted to be present at this very special occasion since the festival was cancelled in 2020, and although it ran last year with limited numbers, it was back at full capacity and throttle this time round for the first time since the pandemic arrived.

The festival attracted crowds of around 200,000 car enthusiasts and is essentially a motorsports festival set in the grounds of the Duke of Richmond’s Goodwood estate and features the iconic hill climb race and many new and historic cars. It’s been running for almost three decades and other attractions include a forest rally, a supercar paddock and an arena where you can watch stunt driving.

Vehicles from F1 models to motorbikes, championship winners to exotic road models and classic cars, vie to scale the main uphill course, with a selection of the fastest competing in a ‘shootout’ at the end of the event.

This time around, the weather was warm without the intensity of the July heatwave, and we were lucky to have minimal rain.

Under the banner ‘the innovators – masterminds of motorsport’, the festival theme for 2022 centred on technical innovation in motorsport. from disc brakes to turbocharging, hybridisation and more.

This year also saw the return of ‘Electric Avenue’, a showcase of electrified vehicles and zero-emission transport that was such a hit previously. Everything electric from the Lotus Evija hyper car to the 2021 Car of the Year, the Ioniq 5, was there, but the star of the show was the McMurtry Speirling electric ‘fan car’ which set a new record for the hill climb with former Marussia F1 driver Max Chilton behind the wheel.

Highlights from this year’s event

The undisputed top highlight of the Goodwood Festival of Speed 2022 was the fastest-ever hill climb by an electric vehicle, achieved in a record-smashing 39.08 seconds.

For celebrity spotters, there were a number of veteran F1 drivers in attendance, including Nigel Mansell, celebrating the thirtieth anniversary of his F1 world championship by completing the hill climb with some of his iconic vehicles, plus Damon Hill and three-time F1 winner Sir Jackie Stewart, alongside reality TV star Caitlyn Jenner, footballer David Beckham and TV superchef Gordon Ramsay.

But there were further key highlights too, including the other incredible speeds achieved, plus the highly anticipated unveiling of some top supercars, including the introduction to some new concept models from top marques including Ferrari, Porsche and Lamborghini, showing off their creations for the first time in West Sussex. While the event is a celebration of motor racing, Goodwood is also very much an industry event, and manufacturers love showcasing their newest creations here. Here are some examples:

This Merc, featuring four electric motors, accelerates 0-200 km/h in 7 seconds or 0-300 km/h in 15.6 seconds, or 0-62mph in almost three seconds, with an electronically regulated highest speed of 217mph. This model has taken years to complete, and Lewis Hamilton first unveiled it in Frankfurt in 2017, but it made its debut at Goodwood, completing the hill climb on each of the festival’s four days.

This stunning-looking model packs a V6 twin-turbo engine, powered by pre-chamber combustion technology, while its glass roof is retractable. The convertible alternative to the MC20 coupe carries a hefty £187k price tag (£30k more than its sister model) and marks a return to form for the Italian marque. With a carbon-fibre tub, it’s only 65kg heavier than the coupe.

Dubbed the SUV supercar, this 4.0-litre V8 produces 900nm of torque and 67bhp. It’s the ultra-powerful version of Aston’s debut 4×4. With a top speed of 193mph, you can get to 62mph in just 3.3 seconds. It makes uses of a new wet-clutch nine-speed automatic transmission instead of the standard torque converter, with power reaching all four wheels.

This £1.5m supercar is a relaunch for the French marque, not seen for some seven decades but once favoured by the super-rich. With jet-fighter looks plus a V12 hybrid engine, it can reach speeds of 233mph.

What we at FEV gained from the occasion

For us, the 2022 Goodwood Festival of Speed was really all about meeting different people with a shared interest in motorsport, from racers and drivers to historic and classic car enthusiasts, all of whom want to protect their beloved vehicles with a fire extinguisher. As well as our handheld and plumbed-in systems, we saw intense interest in our high-quality safety accessories.

So it’s fair to say our team enjoyed a fantastic four days at this glorious West Sussex estate, spent mainly talking to new and existing customers. But we also had time to walk around the festival, and it was great to see FEV’s own systems in use in so many vehicles that were either present for the event or actively taking part. We’re already looking forward to next year!